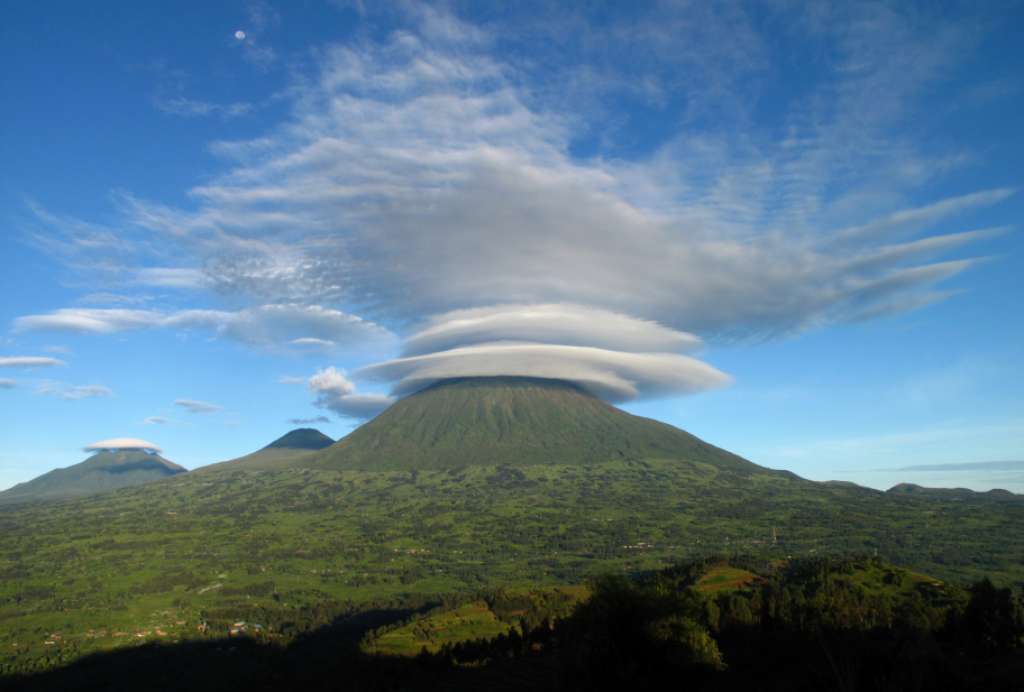 Virunga National park is one of the best with diversity within the Albertine rift valley and Africa at large . Almost more than half of what’s in Sub Saharan Africa in concentrated in this park. This park also boosts of two active volcanoes. Virunga national park though has for a long time been threatened by political conflicts in DRC but somehow its still surviving and was recently reopened. Established in 1925 by the King of Belgium Albert 1 and it was first called Albert national Park. It was primarily gazetted to protect the endangered Mountain Gorillas which can also be found in Uganda and Rwanda Only.

After 1960 when Congo had gotten independence the park deteriorated just like the country and it was not until the early 70s when the president picked interest in conservation that the park was revived and renamed Virunga National Park. The park is about 7800 sq km and stretches from Virunga Mountains in the South to the Rwenzori in the north. The park is well known for its bird, mammal and reptile concentration than any other protected areas in Africa. Some of the notables include the chimpanzees, mountain gorillas, giraffes, buffaloes among others.

Virunga National Park is the oldest wildlife protected area on the African soil created to protect and conserve the unique wildlife species within, for science and research purposes and protecting an indigenous threatened fruit-gathering community; the Twa( Batwa). The Virunga wildlife conservancy is the joint where the West African rain forests meet with the East African savanna grasslands and runs more than 300 km along the Albertine rift valley that separates the African continent from north to south.

The trace of Virunga’s rich diverse ecosystem that includes block mountain, volcanic mountains, the Albertine rift, craters and crater lakes, rain forests, woodlands, open grasslands, swamp and wetland vegetation among st others extend into Uganda’s Bwindi Impenetrable, Queen Elizabeth, Semliki, Rwenzori and Mgahinga National Park as well as Volcanoes National Park in Rwanda. Mountain gorillas in Virunga have been the major attraction in this park given the fact that this is among the few parks in the area with these endangered gorillas.

People prefer to track the gorillas here also because the cost is low and the park is also less congested compared to other tracking centers like Bwindi in Uganda and Volcanoes national park in Rwanda. This park is still fresh for new discoveries since it has not had a lot of tourism activity for a long time since its origin and it is proved the best place for research and adventure in the same line. For some good time the area has been free for rebel activity and it is safe to travel, there is of course propaganda that the place is not safe but what of the influx of tourist coming in every day.

In 1979, the Virunga was declared a UNESCO World Heritage Site because of her ecological importance though political upheavals have had negative implications on the conservancy. The 1990’s war period in the Rwanda was so challenging to the Virunga because of high influx of refugees into the Virunga conservancy who encroached on wildlife resources. In 1994, the Virunga conservancy was declared World Heritage in Danger and later became a Ramsar site of international importance in 1996. The Virunga is still rated a strong ecological pillar for the entire east and central African ecosystem.

Virunga National Park is located in Eastern DR Congo. Travel by road to Virunga is challenging in some way from the rest of DR Congo except Goma Town 32km close. Many travelers to Virunga National Park fly to Kigali International Airport, connect by road through Gisenyi town, and cross to Goma in DR Congo by dirt road. From Gisenyi it is average 2-hour drive to reach the park headquarters at Bukima.

Travelers from Uganda side cross at Bunagana border post in Kisoro town and take an hour drive to Bukima the Mountain gorilla trek starting point. Ethiopian Airways operates single flights each week to Goma. The park arranges private transport for travelers arriving by air at Goma Airport. Seek guidance from Virunga National Park on the best way to travel into the park. Travelers may need ranger escorts at times to guide them on the best way to make it to the tourism zones.

Climate; The Virunga conservancy is many travelers’ dream destination because of pleasant warm weather and mild showers. The equator line runs through the Virunga and carries with it high temperatures. Some parts of the Virunga are at a higher altitude and get chilly all the time. The Virunga volcanic soils are rich in nutrients for plant growth and the favorable temperatures ensure rapid plant growth. The surrounding large water bodies; Lakes Kivu, Edward, Albert and other smaller lakes, Rivers Congo, Nile, Semliki and other tributaries have cool breezes and are ideal for water adventure activities.

These factors result in a pleasant mix of tropical and equatorial climate with to mean rainfall at 190 mm (7.5 in). Mean temperatures vary between 23–28 °C (73–82 °F) in lowlands, and 16–24 °C (61–75 °F) at higher altitude. March-May and September -November experience large volumes of rains and night temperatures drastically fall low. The climate is favorable for travel and exploration of Virunga attractions all through the year.

Unique impressions of number of wildlife species and populations overwhelm travelers on tour into Virunga National Park Congo. A combination of factors pleasant weather, soils that are fertile and rich in plant mineral content, limited number of travelers explore, discover and congest the wildlife have allowed the Virunga to remain pure and chaste. The conservancy is very rich in wildlife species, a very vibrant plant life and boasts of close to 2,077-plant life of these 264 are tree species and 230 of the grasses, shrubs, and plants are endemic to the Albertine Rift.

Swamp and wetland vegetation ring the water bodies rising to open grasslands, woodlands, rainforests, montane forests, heath and alpine vegetation in the highlands. The Virunga is top travel destinations for travelers with an eye for wandering in the lush vegetation to explore and discover the beauty that is hiding in the African wilderness.The Virunga overflows with stunning beauty shown by high diversity in terrain, land features, vegetation and plant species. The Virunga National Park has ideal habitat conditions for any mammal species.

Chimpanzee tracking; Chimpanzees tracking safaris are the second most popular tourism activity in the Virunga that started in 1987 by Frankfurt Zoological Society for research study purposes. Travelers walk into the forest and explore the rainforests on the lookout for families of chimpanzees that are less bothered by curious eyes of adventurers. Travelers tracking chimpanzees are restricted to one-hour interaction with the chimpanzees. Chimpanzee habituation exercise is an exciting travel activity that gives travelers an entire day unlimited interaction with families of chimpanzees. The chimpanzee habituation teams set out early morning and wander into the rainforests looking for chimpanzees before they leave their nests, spend entire day observing and discovering their habits until evening when they make nests for the night.

Nyiragongo hike; Virunga National Park is a travel destination blessed with natural beauty in abundance. Nyiragongo is an active volcano where volcanic eruption goes on in a lava lake all year round. Hiking to the summit of Nyiragongo and observing the natural geographic force as boiling molten lava gush out of the earth crust is an experience that is so rare and for the stonehearted. Nyiragongo hiking safari is a test for travelers bravery and a very rare opportunity that awakens travelers adventure senses.

Nature walks; Virunga National Park is a majorly tropical rain forest with dense vegetation. However, some parts are woodland, grassland and swamp. Adventure travelers on safari to Virunga set out in the morning and walk into the wilderness to explore and discover the breathtaking beauty of the landscape and entire wilderness. A defined trail system leads travelers to secret corners with unbelievable sightings and unique sounds from the wilderness.

Birding watching; Virunga has varied habitats that range from mountains, rainforest, open grassland, swamp and marsh, water bodies and rift valleys. These attract different species of birds with more than 706 record sightings. There bird watching expeditions in Virunga have very high potential but opportunities are not fully exploited as of now. Grey throated barbet, Madagascar bee-eater, Narrow-tailed starling, Rwenzori Turaco, African fish eagle and many others are often sighted.