skip to Main Content
+256 774 892 083 / +256 787 224 568 info@alphawildsafaris.com Plot 4, Kimathi Avenue Kampala Uganda.
The Batwa are some of the most interesting tribes in the world because of their unique culture and their way of life. Batwa Experience is quite unique. Batwa people commonly known as “pygmies” currently still live in Uganda, Rwanda, Burundi and Eastern Democratic Republic of Congo with a total population of 86,000 to 112,000 in all the respective countries. You may be asking yourself what language Batwa people speak, Batwa is a derivative root word common to Bantu language group meaning they speak Bantu related language. 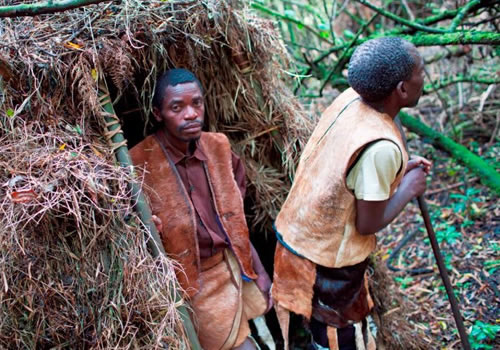 A person of Batwa tribe is known as Mutwa in singular and the nation of Batwa is called Butwa. The term “Twa” is used by the Bantu language in the sub-Saharan Africa to refer to people who are almost every case hunter gatherers. Batwa people are believed to have originated from central Africa and are continuously being marginalized and silenced which has rendered them one of the Central Africa’s most vulnerable and endangered groups. These small-stunted people are the oldest surviving tribes in Africa but their culture, identity and language are under increasing threat. The Batwa people survived by hunting using arrows and spears and then gathering fruits of trees late in their habitat which was formally the forest. Batwa is a member of an ethnic group whose average height is usually short where adult men are average less than 150cm or 4 feet. It’s because of their defined height and unique culture that makes them more interesting. Batwa are found in various corners of the world for example Batwa of Uganda are situated in south west of the country particularly in Bwindi impenetrable forest national park. These endangered group of people are in areas of Echuya forest reserve in Kisoro and Kabale districts. Echuya is located in the Albertine Rift region recognized as an important eco-region .And then Batwa people of Rwanda mainly live on the inaccessible fringes of the forest volcanoes and Batwa of Eastern Democratic Republic of Congo live around Kivu near Uganda and Rwanda borders in Ituri forest however all are Batwa just split in different allocations . Batwa being a fascinating and entertaining tribe, it has also been considered for tourism. However, the government of Uganda literally allocated an affordable cost for visitors to visit and have an incredible experience with Batwa that is $80 per person and there are higher chances to see Batwa when in any of those places. While on your trip/tour to Uganda or Rwanda always include Batwa experience, it’s very amazing and entertaining when with these unique people’s life experience. Book your trip with Alpha wild safaris and explore more.
FOLLOW US ON FACEBOOK