The Lifestyle of Gorillas.
Gorillas like all apes live a tremendous social life and comparatively united in groups called troops where each united group bares one or more dominant adult male as silverback to be in charge of the troop which include the black back as well as females which are juvenile along with their infants. Mountain gorillas also bare some adaptations to the Environment they live. Since they are most of their times based in the forest, they are mainly herbivores and by being so, they bare flat teeth that enable them grind plants and smoothen digestion to take place.
In Gorillas, for one to become a silver back, there are also factors considered for example brain and the weight in other wards how big an individual is. In addition, gorillas are calm creatures less adaptable and curious than chimpanzees or other primates and don’t show inclinations to imitate.

Gorilla Reproduction
Gorillas have a gestation period of 257 days or 8-9.5 months next to human. After all the persistence of pregnancy, the mother gorilla gives birth in less than half an hour to a new born baby that weighs about 1.4 or 1.8kgs at birth. A mother gorilla seems not feel the labour at birth but it comes and lasts for 3 days. However gorillas only have 3 babies their life time in other wards give birth only three times their life each at a time. And their lifespan is 40-45years in the wild.You may be asking yourself how mountain gorillas look like if never sighted on , Gorillas like all great apes have long arms longer than the legs and tend to walk on all four limbs at certain times a movement that is called knuckle walking. 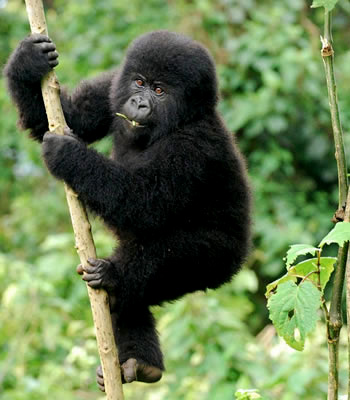 Uganda has 11 gorilla groups or families habituated for trekking while one is for research. Gorilla families in Uganda include, Rushegura, Habinyanja, Mubare, Nkuringo, Bitukura, Oruzogo, Mishaya, Nshongi, Kahungye, and recently the new groups called Busingye and Bweza. Kyaguriro gorilla group located in Ruhija is for research. Mountain gorilla habituation takes about 2-3 years and below are some of the gorilla families in Bwindi.

Mubare Gorilla Family
This family is situated in Buhoma sector and is composed of 9 members including one silverback.
Mubare is the oldest habituated gorilla group in Uganda. It was found in the Mubare hills, further in Bwindi forest, and was fully habituated in 1993. The group started with 12 family members, led by the dominant silverback Ruhondeza. In a few years the group grew to 18 individuals. Unfortunately, due to fights with wild gorilla groups and loss of members.

Habinyanja Gorilla Family
This gorilla family is also found in Buhoma sector composed of 15 members including 2 silverbacks
The Habinyanja group was first visited by tourists in 1999. The name comes from “Nyanja” which is the local word for ‘body of water’. It refers to the swamp in Bwindi Impenetrable Forest where the group was first sighted. Habinyanja is a fascinating family with a lot of drama and commotion. This is caused by the power struggles between the dominant silverbacks and fights for the family leadership. The adult females are led by the shrewd alpha female called Kisho.

Rushegura Gorilla Family
This gorilla family is in Buhoma sector with 18 members with no silverback.
The Rushegura gorilla family was brought together in 2002, after one of the silverbacks from the Habinyanja group decided to break away. They started with 12 individuals including 5 females. This “Habinyanya 2 group” quickly received a new name, that derives from “Ebishegura” – a tree specie that was abundant in the home area of the new family. The Rushegura group is a calm family. In the past they used to cross the border to neighboring DRC every now and then but always returned to Bwindi Impenetrable Forest. They are usually not far from Buhoma Village and sometimes even wander through the gardens of the lodges

Bitukura Gorilla Family
This gorilla family has 12 members with 4 silverbacks in Ruhija sector.
The Bitukura group was named after a river where the family members were first sighted. The habituation that started in July 2007 was a relatively easy process as the gorillas were already frequently encountered by the UWA rangers. Although the habituation process normally takes a minimum of two years, this group could already be visited by tourists within 15 months after the start. Bitukura is a peaceful family including 4 silverbacks and some playful juveniles. They share a close bond and often have ‘group meetings’.

Nkuringo Gorilla Family
This family is in Buhoma side composed of 19 members accompanied by 2 silverbacks.
The Nkuringo group was named after the Rukiga word for “round hill” and was launched in 2004. One of the most important reasons for their habituation were the problems they created for the local communities by destroying crops and other products. By opening up the gorilla family for visitors, the community could directly benefit from tourism and it formed a protection for the gorillas as well. The family was led by the silverback Nkuringo who died in 2008, leaving behind 2 silverbacks in the group. In November 2008, the Nkuringo family expanded thanks to the special birth of a twin – Katungi and Muhozi – though Katungi unfortunately died at the age of 1.5 years. Please note that gorilla families in Uganda keep changing as more members are born, other die and other gorilla families in Uganda seperate to produce more families.

Nshongi Gorilla Family
This has 36 members with 5 silverback in Rushaga sector
Nshongi is the largest group ever habituated and was officially launched in September 2009. It was named after the river Nshongi, close to the place where the gorilla family was first seen. Although most gorilla families in Uganda usually consist of 25 members with one or two silverbacks, this family is a rare exemptions. Another remarkable fact is that the group is led by Nshongi, who is not even the oldest silverback in the family.

Busingye Gorilla Group
With 7 members including 1 silverback in the group.
Busingye gorilla group is the newest family to break away from Kahungye which was opened for trekking in 2011. It was suspected that at one time Kahungye would split as it had three silverbacks and a bigger group.

How to get to Bwindi Impenetrable forest national park.

Bwindi Impenetrable forest national park is a major site where you can have your Gorilla trekking experience in Uganda. It can be accessed from the North through Queen Elizabeth national park 2-3 hours’ drive from Kampala through Mbarara about 6 to 8 hours’ drive or from Kabale town to the southern just 1 to 2 hours. These roads then converge at Butogota, just 17 kilometers from the Buhoma entrance-gate.

Where to stay in Bwindi during gorilla trekking.
During your Gorilla Trekking Experience, Bwindi impenetrable forest national park has got a number of accommodation facilities both within the park and its neighborhood in categories to meet every ones budget. Accommodation facilities in this park are Budget, Midrange, Luxury and camping. They are in forms of lodges, hotels, resorts, camps among others.
These accommodation facilities are these sectors of the park, Buhoma, Ruhija, Nkuringo and Rushaga sectors. Some of these facilities include; Bwindi forest lodge, Buhoma lodge, Gorilla safari lodge, Ichumbi gorilla lodge, Bakiga lodge, Gorilla mist lodge, Gift of nature lodge among others.
Get in touch with Alpha Wild Safaris Company to have your accommodation facilities and transport means earlier booked in advance to enable you have an amazing gorilla trekking experience in both Uganda, Rwanda and DR Congo.

The Gorilla Trekking experience can be quite tedious but worthy. However, there are a number of Requirements for Gorilla Trekking supplemented by Rules and Regulations that should be observed in order to have a successful Gorilla trekking Experience.