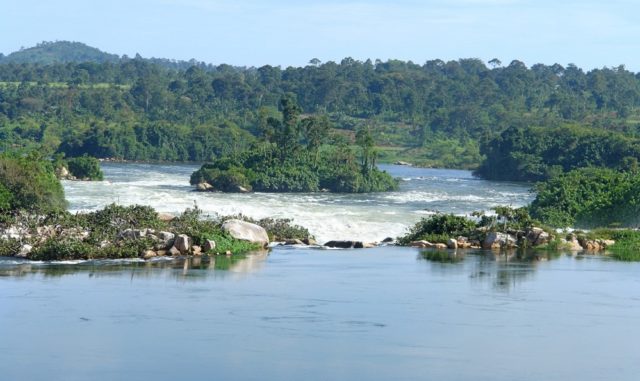 Source of the Nile River in Uganda

The Source of the Nile in Uganda in Uganda is a major tourist attraction. River Nile is famously known to be the longest river in the world with its source starting from Uganda particularly in Jinja which is also reffered to as “Adventure Capital of East Africa” . The word “Nile” was derived from a famous Greek word meaning “valley”. This explains why it was called valley, the River starts from the Northeastern of Africa particularly Uganda and it flows from the surrounding areas close to the Equator, safari desert and up to the Mediterranean Sea. The Nile River is about 6696 kilometers long and it pours its water to over nine countries though mainly centered in Uganda and Egypt. The other countries include Sudan, Burundi, Rwanda, Tanzania, Kenya, Zaire and Ethiopia mainly. The River consists of two major twigs which include the Blue and White Nile that connects in Khartoum the capital of Sudan to form a core Nile that is made up of Cataract Nile along with the Egyptian Nile . Among the twigs, the White Nile is the longest and splits into three parts namely; the Lake plateau region, the Sudd and the Central Sudan region.

Contributions of the River Nile to the Neighboring countries.

The River Nile has contributed a lot to its neighboring countries specially Uganda as the Centre country and Egypt in terms of modernization. Its history and physical beauty has been the major source as to why such countries are called so by their names especially Uganda. The banks of the Nile are fertile enough to favor agricultural activities and still provide water to the local people around for domestic use and other related purposes. The Nile River provides hydro electricity power generated from the nearby contracted dams for example Karuma falls dam,Bujjagali falls dam among other dams an activity that has kept citizens daily activities smoothly ongoing. Besides the above contributions, the river has also supprted animal ife specially for those which base most of their life in water.

Activities to Engage in while at the source of the Nile

While on the Nile, so many activities are done that attract many people’s attention for example water rafting, boat rides, sunset cruises, bungee jumping, hot air balloons, nature walks,horseback ridding,bird watching, spot fishing as well as Kayaking a wide range of activities to choose from for a memorable experience on the Nile River especially to its genesis in Uganda. While at the source of the Nile Uganda, you surely get to know that Uganda is indeed the pearl of Africa as stated because of the existing beauty at this particular site. This means for your best lifetime experience, always when on your tour in Africa, the Nile must be one of the places to visit before going back home. It’s a must see beauty of Africa at all times especially in Uganda its source. River Nile being the longest River in Africa, it has its source on Lake Victoria the world’s second largest fresh water lake still in the country Uganda. It starts its 6500km journey to the Mediterranean sea in Egypt besides Jinja town in Uganda and holds the Owen falls Dam as the source of hydroelectricity power for Uganda. It also provides a beautiful focal point for the flow of water from Lake Victoria the only outlet.

Things to see in and near Jinja

While in Jinja you encounter various fascinating places of adventure such as; Jinja town as an industrial capital worth to visit,the amazing Sezibwa falls, mabira forest the only rainforest in central Uganda, Samuka island hideway, Bird sanctuaries and the amazing tea plantations spawling across the hills creating a fantastic view. The beauty of the Nile is endless to make it precise, the Nile still flows though Lake Albert to the Northern part of Uganda further to Sudan and finally to Egypt where it pours its masses of water into the Mediterranean sea. To conclude, always while on your trip/tour to Uganda, consider visiting the Source of the Nile because this is a must to see attraction.