skip to Main Content
+256 774 892 083 / +256 787 224 568 alphawild51@gmail.com Plot 4, Kimathi Avenue Kampala Uganda.
Tooro Semuliki Wildlife Reserve is one of Uganda’s first protected areas gazetted in 1926 to protect the existing large number of Kobs and other wildlife. The park is situated in the Western Uganda shared by Ntoroko and Kabarole districts and it covers and an area of 542 square kilometers. The park enjoys substantial rift valley setting between the Kijura escarpment, Rwenzori and Lake Albert. The park is relatively at a low altitude from 700m and truly amazing on a clear day setting with a sheer rift valley escarpment rising sharply from the shores of Lake Albert up to 2500m high Congolese Blue Mountain on the western horizon and the mighty glacial peaks of Rwenzori mountains on the South western side. The reserve is occupied by two major tribes the Bakonjo who are mainly cultivators. These cultivators mainly grow beans, maize, bananas, cassava, soya and rice. The other tribes are Batuku people who are predominantly pastoralists / cattle keepers also known as Batooro-Bahuma. This reserve is surrounded by certain communities which include; 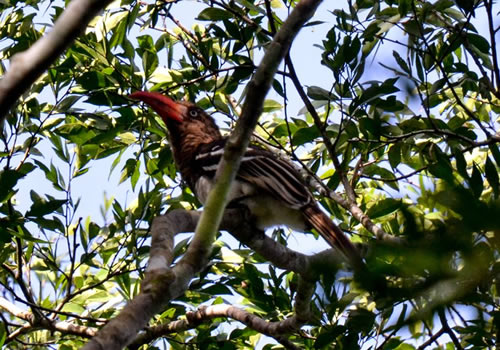 Rwebisengo community: This community is situated in the west and North western edge of the reserve in the Semuliki flats. This community is majorly occupied by Batooro-Bahuma (Batuku) people who predominately pastoralists who depend on their cattle products which they sell to their neighbors among others. Karugutu community: This community is located about 18km from Fortpotal town and south of the reserve. This is also inhibited by Bakonjo traditional cultivators who grow beans, cassava, rice, bananas, soya among others that they distribute/sell to Rwebisengo and Ntoroko markets them being neighbors. Ntoroko fishing community: This another community situated in the southern tip of Lake Albert between Muzizi Rivers and estuaries Wasa. This community covers an approximate area of 4km and has been promoted as a wildlife sanctuary to protect the existing wildlife in the area and in the reserve at large. Kasesenge – Kyabaseke community: The majority of people occupying this area are Bakiga immigrants who originally came to work in the tea estates in the 1960’s during the economic good times. This community is located on the eastern escarpment of the rift valley.

As a wildlife reserve there are several tourism activities taking place and these include; Primate walks: This is one of the major activities in this reserve and is done close to Semuliki safari lodge to have sightings of primate species which include chimpanzees, red tailed, black and white monkeys among others. However during this same walk you can still spot on other wildlife such as buffalos, Uganda kobs, elephants, waterbucks, bushbucks among others. Game drives: Game drive activities in this reserve are done in major three tracks across the savannah grassland. During this drive, tourists are always exposed to a number of wildlife which include small forest and larger savannah elephants, Buffalos, antelopes such as Uganda kobs, waterbucks, bushbucks and a variety of Savannah bird species. Other wildlife like the leopards and Bush babies a primate species mainly active in the night are also present. Game drives here are always done in the morning, afternoon and in the night for sightings on Nocturnal species like Bush babies and white tailed mongoose. Nature walks: This walk lasts for 2-3 hours exploring different habitants ranging from Savannah woodland to riverine forest. Wildlife species encountered during this walk include Uganda kobs, warthogs, baboons’ vervet monkeys and black and white colobus monkeys. Boat cruises: Boat cruises on this lake are conducted on Lake Albert and the main attractions here majorly bird species such as shoebill storks, Blue breasted and blue chested bee eaters and Blue headed coucal mainly spotted on the lake shores. Community tourism: There is a set up association in Karugutu community called Karugutu community conservation Association that educates through dance and drama and also organizes traditional dances for visitors on the visit to the reserve. Hike to Nyaburogo gorge: The walk to this gorge is an ideal to bird lovers through different habitats ranging from Savannah woodland to riverine forest with sightings of certain bird species like Arrow marked Babbler, Tropical Boubal, Black-headed Bushrike, Luhdrers Bushrike and primates including Black and White Colobus, Baboons, vervets and occasionary the Chimpanzees.  Wildlife habitats The Toro Semliki plain is predominantly grassy savanna and acacia-combretum woodland echoing Murchison Falls National Park at the northern end of Lake Albert. Stands of borassus palms, lake shore marshland and broad river valleys filled with beautiful galley forest all add variety. Lake Albert lies outside the reserve but can be visited for canoeing and bird watching. Wildlife in Tooro Semuliki Wildlife Reserve Toro semliki contains the same key species as Queen Elizabeth and Murchison Falls National Parks; Elephant, Buffalo, Uganda Kob, Waterbuck, Warthog, Giant Forest Hog, Hippopotamus. Primates include Chimpanzees, Baboons and Monkeys including Vervet, Red-tailed and Black and White Colobus. Uniquely, the 200 strong Elephant population includes savannah and forest Elephant plus a hybrid form from inter-breeding. Researchers from the University of Indiana have been studying chimpanzees in the riverine forest at Mugiri close to Semliki Safari Lodge. The reserve also boosts over 440 bird species including Red-necked falcon, Black-billed Barbet and the turkey like Abyssinian Ground-hornbill. The Shoebill is usually sighted in the marshes of Lake Albert. Accommodation The reserve also offers accommodation fascilities ranging from campsites, lodges and hotels of different categories for example from Luxury, midrange to budget. Some of these include Semuliki safari lodge, Semuliki game lodge among others. How to get to Tooro Semuliki Wildlife Reserve. On road. There are two routes to access Tooro semuliki reserve and these include Kampala-Mubende via Fortpotal or Kampala-Masaka route via Kasese town. From either of the points to fortpotal town you will drive 28km further before turning right at Karugutu trading Centre. The reserve is located 3km further. By Air Within the reserve there is an airfield located close to Semuliki safari lodge and this Airfield is managed by Uganda wildlife Authority (UWA).
LIKE US ON FACEBOOK