skip to Main Content
+256 774 892 083 / +256 787 224 568 info@alphawildsafaris.com Plot 4, Kimathi Avenue Kampala Uganda.
Katwe Salt Lake is one of the most important tourism sites that has attracted attention of many people both in Uganda and the neighboring countries like Congo, Rwanda, Sudan and Tanzania to engage in in its salt mining. This adventurous site is found in western Uganda particularly katwe town in the outskirts of Queen Elizabeth national park north east of Lake Edward and south east of Lake George in Kasese district. 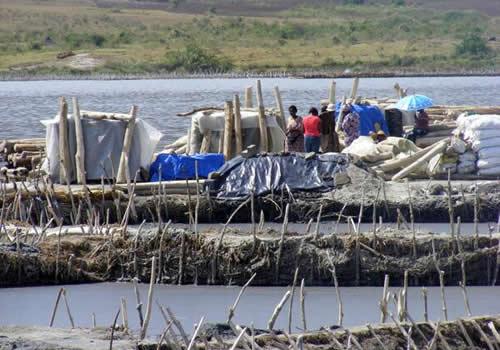 This salt mining site is one oldest still surviving industries in the country and has played both economic and political roles in the history of western Uganda especially for the inhabitants of the Rwenzori region. Explorer H.M Stanley was the first white man to have a written report history on salt exploitation on Lake Katwe. H.E Stanley didn’t only report on this Lake but also took with him a sample of the discovered mineral to London and Egypt for analyses a process that commenced the process of mining on this Lake. This lake covers an approximate area of eight square miles where its shores are lined with small ponds of water where salt is extracted from the bottom in the process called salt planning. The salt content of this lake water is approximately 13.5%, 0.8 meters of the Lake bed which contains over 12 million tons of salt which varies in composition and depth. The content has salt stocks which are estimated to sustain an industrial extraction plant with a production rate of seven tones of salt per hour estimated for 34 years. Due to this discovery, an industry to mechanize the salt production process was initiated in 1970’s by Uganda’s former president, late Field Marshal Amin Dada whose aim was to extract and recover salt from Lake Katwe brine deposits. However the reasons, the Katwe salt project still exists to date and is one of the Must see sites in Uganda still on blink of privatization. A visit to Katwe Salt Lake is a good highlight for tourists visiting Uganda’s Queen Elizabeth National Park.
FOLLOW US ON FACEBOOK