skip to Main Content
+256 774 892 083 / +256 787 224 568 info@alphawildsafaris.com Plot 4, Kimathi Avenue Kampala Uganda.
Gorilla Trekking is mainly carried out in south western Uganda particularly in Bwindi Impenetrable Forest National Park with half of the world’s population with 13 habituated gorilla families for example there are 3 habituated groups in Ruhija and 5 habituated in Rushaga and one in Mgahinga National Park the other half shared by countries of Rwanda in Volcanoes National Park and Eastern Democratic Republic of Congo particularly in Virunga Mountains National Park. Trekking gorillas in Uganda particularly Bwindi impenetrable forest national park occurs at all times however its better in the dry season of January, February and then from June to December. Gorilla trekking is aimed at tracing the precious gentle giants of the jungle (gorillas). 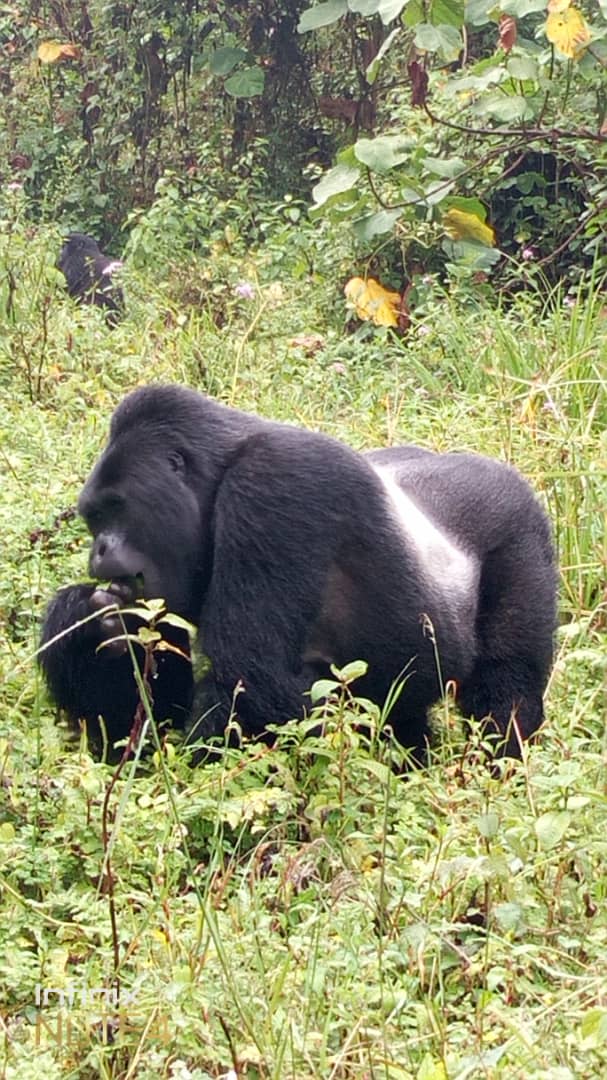 Gorillas like all apes live a tremendous social life and comparatively united in groups called troops where each united group bares one or more dominant adult male as silverback to be in charge of the troop which include the black back as well as females which are juvenile along with their infants. Mountain gorillas also bare some adaptations to the Environment they live. Since they are most of their times based in the forest, they are mainly herbivores and by being so, they bare flat teeth that enable them grind plants and smoothen digestion to take place. For one to become a silverback in gorillas, there are also factors considered for example brain and the weight in other wards how big an individual is. In addition, gorillas are calm creatures less adaptable and curious than chimpanzees and don’t show inclinations to imitate. Gorillas have a gestation period of 257 days or 8-9.5 months next to human. After all the persistence of pregnancy, the mother gorilla gives birth in less than half an hour to a new born baby that weighs about 1.4 or 1.8kgs at birth. A mother gorilla seems not feel the labour at birth but it comes and lasts for 3 days. However gorillas only have 3 babies their life time in other wards give birth only three times their life each at a time. And their lifespan is 40-45years in the wild.You may be asking yourself how mountain gorillas look like if never sighted on , Gorillas like all great apes have long arms longer than the legs and tend to walk on all four limbs at certain times a movement that is called knuckle walking .

Dos and don’ts of Tracking Gorillas.

The gentle giants in the jungle bare some dos and don’ts when dealing with them in their natural habitat for example gorillas have got 98% of human DNA which makes them prone to human disease contraction from man and that’s the reason it’s recommended to always keep a 7 meter distance when in contact with any gorilla family or when very ill you are sometimes recommended not to trek for reasons of conserving for generations. When trekking gorillas in the jungle, you are appointed to one ranger guide who also gives you rules and regulations to follow while trekking gorillas for example keeping seven meter distance, minimize on the noise that may scare away gorillas or make them aggressive. Then, visitors are also advised to control excitements when in presence with any gorilla family that may disrupt their freedom. Also while in the habitat of the gentle giants, you are advised not to litter any wastes for example empty water bottles and other belongings mainly for conservation reasons and enable their multiplication. To pay and trek gorillas, you need to at least be having 15 years and above to get granted to trek the gentle giants in their habitat.   In case of long calls while trekking, you are advised to dig a hole of about 30cm with the help of your ranger guide and burry your waste appropriately to prevent any transmissions to the precious giants of the jungle. And above all you need to have paid for your gorilla permits as charged for example Gorilla permits for a gorilla family in Bwindi impenetrable forest national park is $600 per person and Rwanda’s current gorilla permit is $1500 per person per gorilla family. In addition, you need to have your accommodation facilities and transport means earlier booked in advance to enable you have a fascinating gorilla trekking experience.

When tracing for gorillas, you need to be equipped with at least 2 pairs of light weight trousers that can dry quickly, two pairs of shorts, 2 pairs of long sleeved shirts , a hat , hand gloves , comfortable hiking shoes and finally 3 sleeved shirts which are preferably moisture wicking then apply insect repellent to scare away harmful insect bites . In addition you also need to have a backpack of enough drinking water, all kinds of cameras but without flash lights for memorable photo shoots and binoculars for clear views, snacks or packed lunch depending on the arrangement of the day to trek gorillas. The gates of these national parks are always wide open for any visitor to explore the secret beauty of various attractions especially for these endangered species which is an adventurous experience. Book your Gorilla Trekking tour/trip with Alpha wild Safaris today and share experience.
FOLLOW US ON FACEBOOK