skip to Main Content
+256 774 892 083 / +256 787 224 568 info@alphawildsafaris.com Plot 4, Kimathi Avenue Kampala Uganda.
Budongo Forest is Uganda’s forest reserve located Northeast of Kampala the country’s capital city and Lake Albert the same way to Murchison Falls National Park in Masindi district. The surface area covers an area of 825 square kilometers of which 430km is continuous forest and this is situated between 1° 37 N – 2° 03 N and 31° 22 – 31° 46 E of the equator. Generally Budongo forest receives between (1200-2200) meters of rainfall yearly rainy seasons being from March to May. The area has a medium altitude, moist and semi-biome rainforest with an elevation between (1110-1590) meters. The forest is famously known for its former abundance of Mahogany trees which are about 80m tall and its large population of chimpanzees. 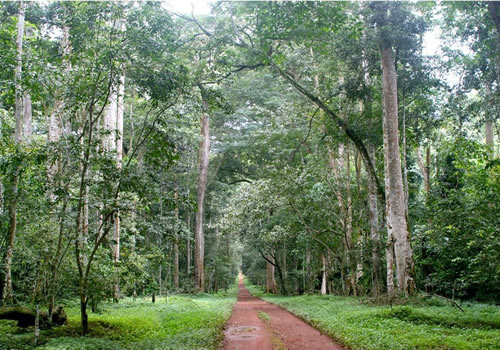 Recorded from Budongo Forest are more than 360 bird species, some 290 butterflies, 130 moths, 465 trees, and 24 mammals, of which 9 are primates. Chimpanzee tracking has become an activity popular with eco-tourists, necessitating behavioral guidelines for visitors in order to avoid undue disturbance of both animals and forest. Trails have been cut crisscrossing the forest, initially to ease access for research workers and since then used by eco-tourists, forest animals and poachers. Part of the land here is still used for crop growing, dwellings and villages for settlement. Some of the mahogany trees that still remain in this forest are cut down and removed by Itinerant pit sawyers. Besides chimpanzees, the forest also inhabits other primate species such as Black and white monkeys, red tailed monkey, baboons, grey checked mangabeys and Blue monkeys. A well developed and extensive trail system with a length of 115 km in total is found throughout the forest, which enables tourist/visitor activities like forest walks, chimp tracking and birding. Apart from the 465 species of plants, the reserve is also famous for the age-old Mahogany trees which can grow up to 80 meters tall. Some of the best bird viewing is found in the area known as the Royal Mile, which is part of Budongo Forest Reserve. About 360 species of birds are recorded to be found in the area including the rare Puval’s Illadopses which is endemic to the region. Other bird species in this area include the Chocolate-backed Kingfisher, Chestnut Crowned Eremomera, Dusky long-tailed Cuckoo, Yellow-browned Camaroptera, Black-headed Paradise Flycatcher, Slender-billed Greenbul, Lemon-bellied Crombec, Forest Robin, White-spotted Flufftail, Yellow and Grey Long bill, Little Green Sunbird, Western Black-headed Oriole, African Emerald Cuckoo, Yellow-manted Weaver, Crested Malimbe and Cassin’s Hawk Eagle among others.

Location and when to visit

Budongo Forest is situated northeast of Kampala capital city of Uganda 3 hour drive on the way to Murchison Falls National Park.
FOLLOW US ON FACEBOOK